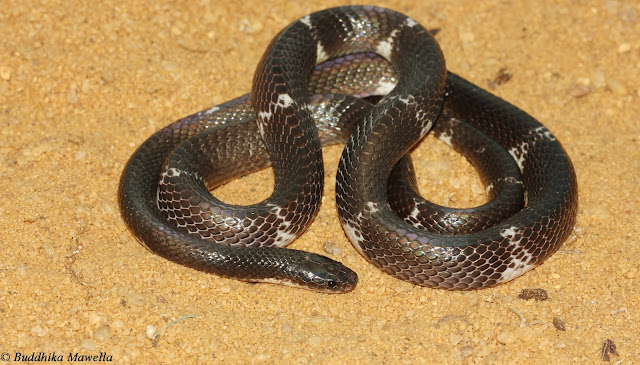 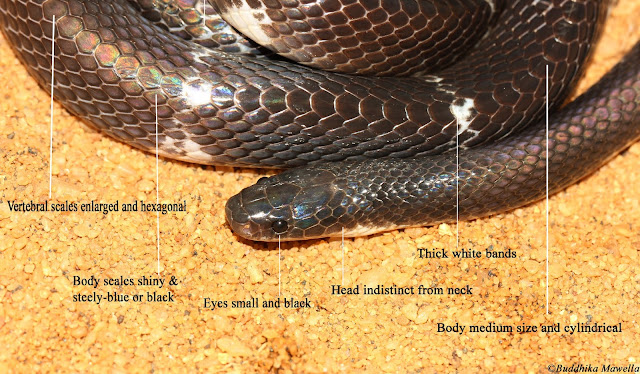 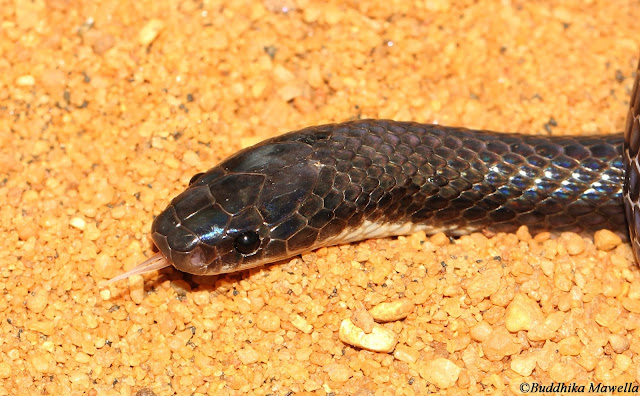 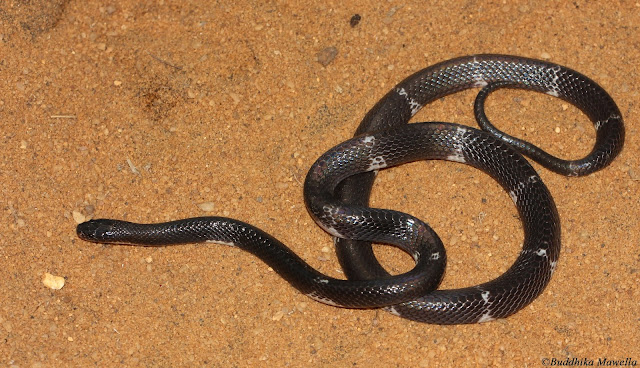 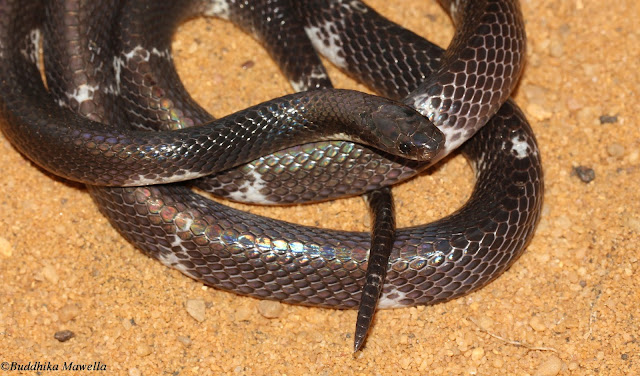 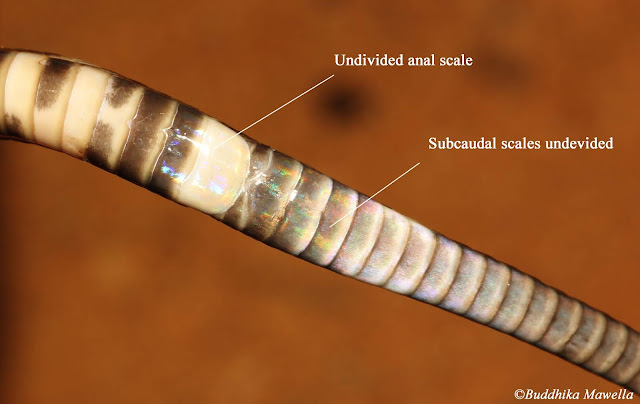 
Bungarus ceylonicus(Sri Lankan krait ,මුදු කරවලා), is a relatively rare, deadly venomous and endemic elapid snake found mainly in wet and intermediate zones of the island. They live in undisturbed forests, but sometimes in anthropogenic habitats. It has a black, shiny skin crossed with thick white transverse bands that get disappeared with the age. There is a set of other non-venomous snakes in Sri Lanka which belong to the genus Lycodon that mimics the color pattern of Bungarus ceylonicus. But B. ceylonicus can be distinguished by enlarged hexagonal vertebral scales, relatively shiny body scales and undivided subcaudal scales. Also head and the neck are not much distinguishable in kraits when it is compared with the members of genus Licodon.

The Sri Lankan krait is oviparous and feeds on other reptiles, small mammals like rats and skinks. Even thought the snake is highly venomous, it showed a very timid and non-aggressive behavior in the day time and reluctant to bite. It was also observed that it always tried to escape and hide in covered safe places when threatened or sometimes tried to protect itself by hiding its head under the body loops. But during the night they are said to be become very active and could provide fatal bites for a considerable provocation. Being a relatively rare to find and shy reptile, fatal human bites are rare. But deaths have been reported due to envenomation.
Venom of B. ceylonicus is mainly powerful neurotoxins that act on nerve endings near the synaptic clefts of neurons. Also, members of the genus Bungarus produce a mix of presynaptic and postsynaptic neurotoxins that need immediate hospitalization and treatments in case of an envenomation.
A specific anti venom has not been developed so far that work effectively for the bites of B. ceylonicus. Even the B. ceylonicus bites are rare; some clinical studies have been done to study the effect of venom on human. The first fatal case report dates back to 1993 for B. ceylonicus(De Silva et al. 1993) which describes a death of a patient within 90 hours after the bite, followed by a cardio-respiratory arrest even with provided treatments such as anti-venom and mechanical ventilation.

Also one such recent case study ( Rathnayaka N. et al, 2017) describes a dry bite occurred at day time which was ended without any envenamation symptoms. According to the report, other incident has been taken place at night while the victim was at sleep with signs and symptoms of moderate envenoming such as tightness in the chest and dyspnoea followed by neuromuscular paralysis. Anotether study (Dalugama C. et al, 2017) describes an envenomation by the same snake which caused bilateral partial ptosis, ophthalmoplegia, facial muscle weakness and dysphagia. According to the authors, that patient had been administered polyvalent Indian anti-venom which showed a poor response for the envenomation of B. ceylonicus. Even the snakes are dangerous; they provide an immense support to maintain a proper balance in an eco system. Habitat destruction an unwanted killing have become the main threat for this relatively rare species.