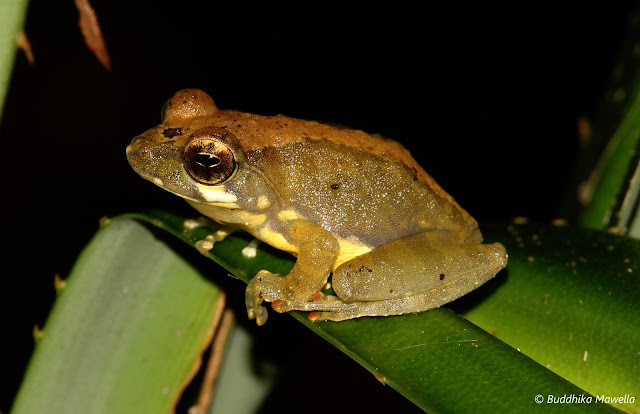 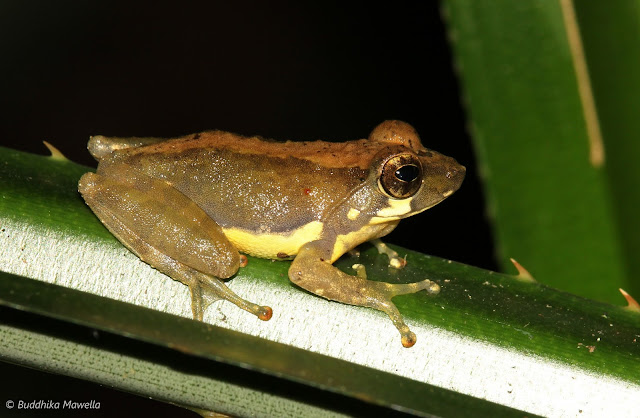 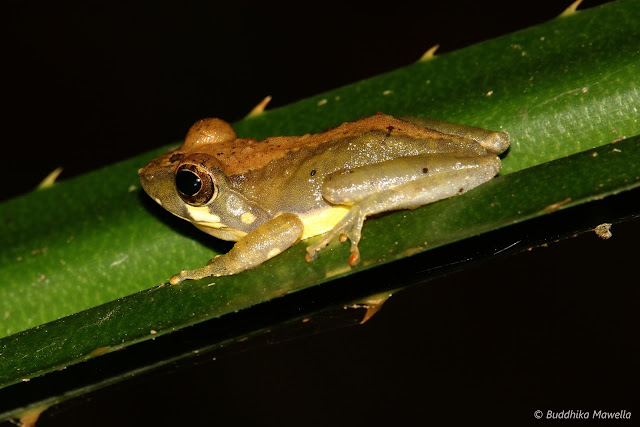 
Philautus procax is an endemic species of shrub frogs found in Sri Lankan highlands. The known population of this frog is restricted to the Rakwana Hills of the Eastern Sinharaja. Bearing a white patch between lower margin of the eye and the upper lip is a distinctive character which is the easiest identification method from other amphibians found in the same region. In the described research paper (Manamendra-Arachchi and Pethiyagoda 2005), they have mentioned that the holotype of the species was found in the elevation of 1060m at Morningside Forest Reserve. Above photographed ones were also found in Sooriyakanda area where the elevation is about 1080m above the sea level. Observed place was a closed-canopy cloud forest and there was a small water stream close to the perched shrubs. It is ‘Critically Endangered’ In the IUCN Red List and any activity that changes the environmental conditions of cloud forests might be a threat for the species. 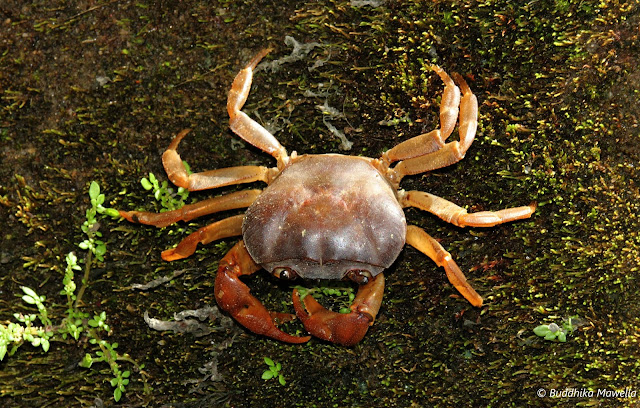 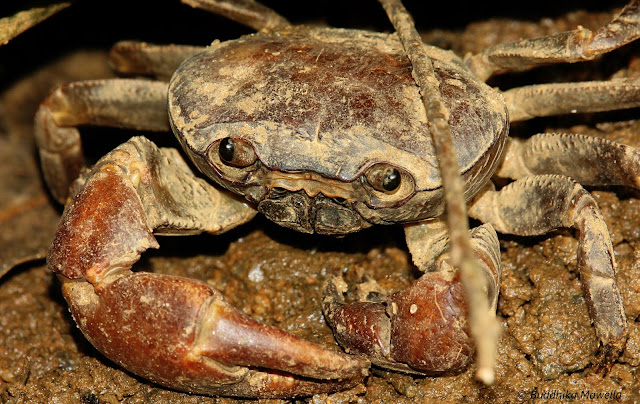 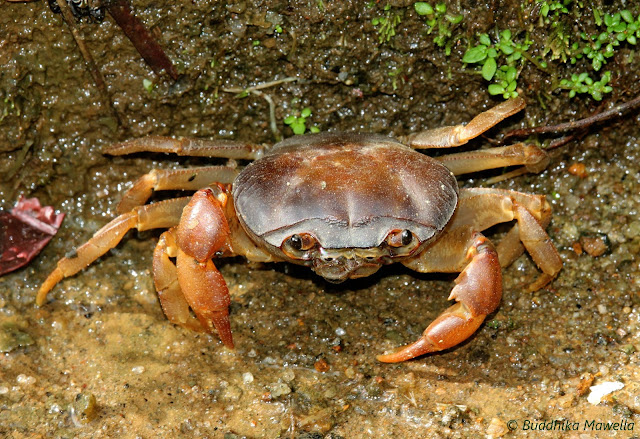 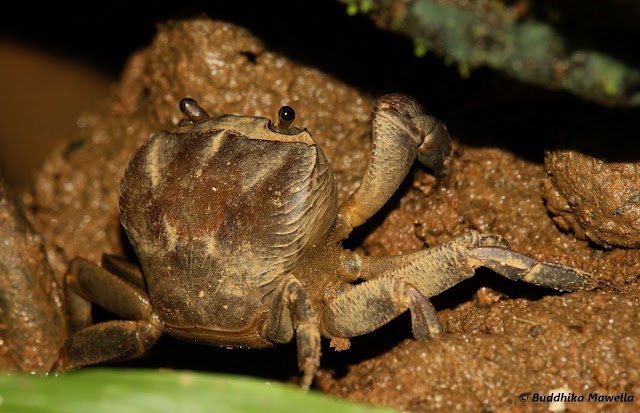 
Mahatha helaya is an endemic species of freshwater crabs found in the hill country of Sri Lanka. This crab is only known from its type locality, near Kalupahana in the borders of water streams close to the main Colombo-Haputale road (Bahir and Ng 2005). All the members of the genus Mahatha are endemic to the island and the species name 'helaya' also has a Sinhala meaning, which is a name for an inhabitant of Sri Lanka. In the IUCN Red list, it is 'Critically Endangerd' due to the very limited distribution.
Above photographed specimens were also found very close to the defined type locality, where margins of a roadside stream at Kalupahana. All human activities that change the aquatic environment of river margins will be the main risk for the survival of this species. 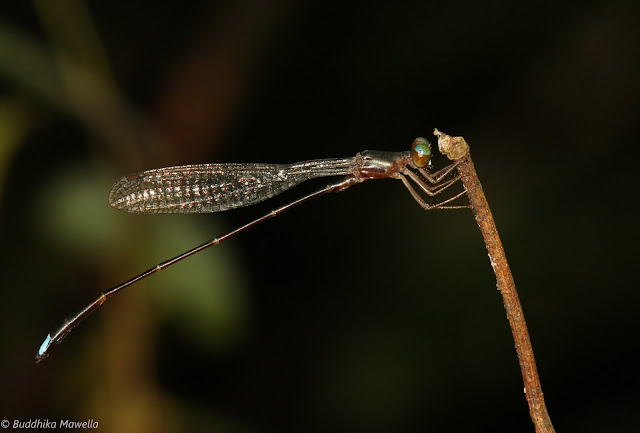 
Ceylonosticta bine is a damselfly restricted to the wet zone. All members of the genus Ceylonosticta are endemic to Sri Lanka. Above photographed one was found at Gilimale rain forest. 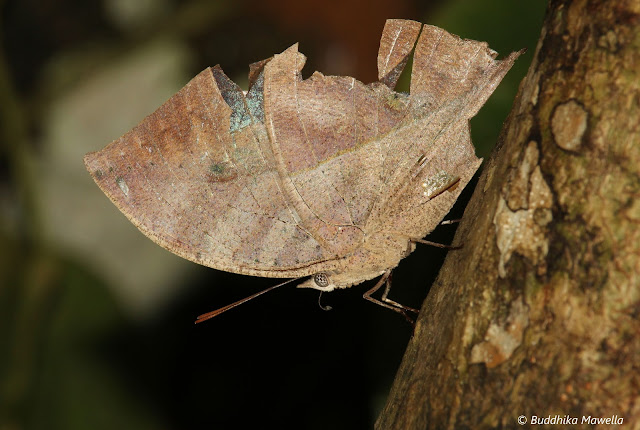 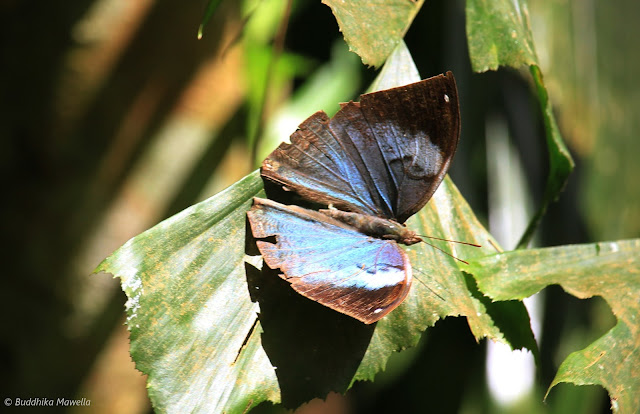 
Sri Lankan Blue Oak leaf is an endemic species of butterflies found in Sri Lanka. They normally rest on trunks of trees pointing the head downwards. When it fold the wings together, its body shape and the color resemble a dried leaf which can mislead predators. The upper side of the wings is blue in color that is only visible if the wings are opened. Host plants of this butterfly belong to Acanthaceae family and above photograph was taken at Sinharaja.
Posted by Buddhika Mawella at 10:54 AM No comments: