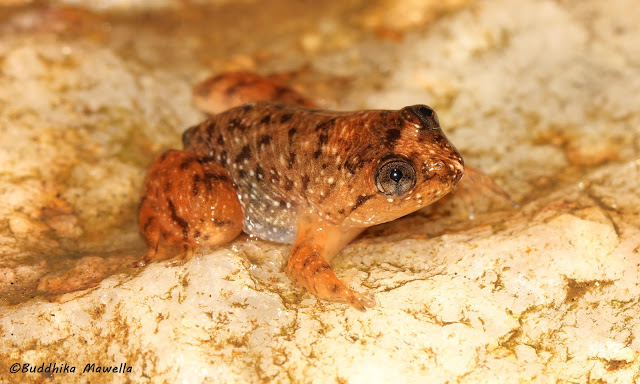 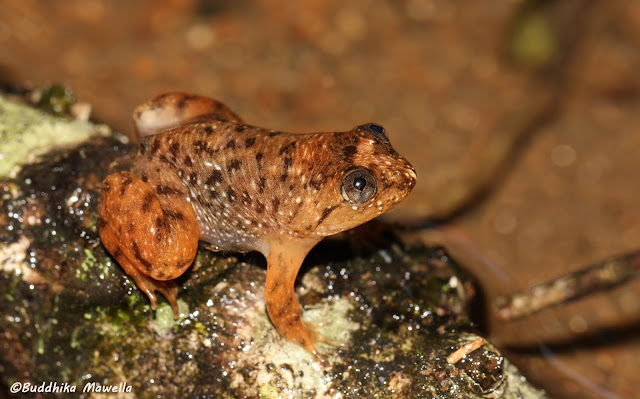 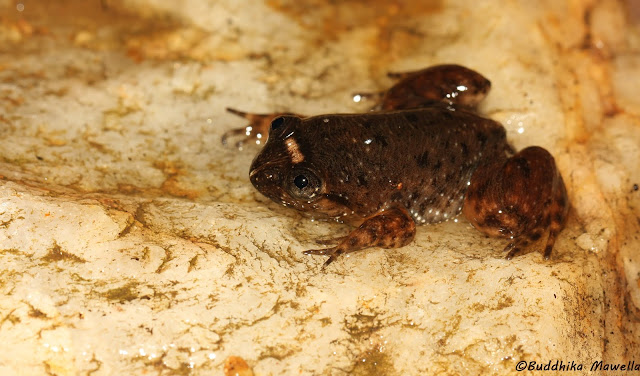 For more than 150 years, it was believed that the genus Lankanectes is monotypic and the genus consists of a one species named, Lankanectes corrugatus. But later, a group of researchers observed an amphibian in Knuckles mountains that was very similar to previously known L. corrugatus, but having some morphological differences.
Finally in 2018, they have described the Lankanectes population resides in the knuckles mountain range as a new species by giving the name, Lankanectes pera. Species was named after University of Peradeniya and the name 'Pera' is a short form of the name for University of Peradeniya which is being used by many university students.
Genetic studies have also been carried out to compare genetic differences between L. corrugatus and the knuckles population of Lankanectes. Results from DNA barcoding and phylogenetic analyses have shown that L. pera differs from L. corrugates by 3.5−3.7% uncorrected genetic distances for 16S rRNA, which is adequate to name the knuckles population as a separate species. Based on the study, they have concluded that the new species defers from L. corrugates in external morphology, genetics and climatic niche.
Distribution of L. pera is very limited and they have been restricted to higher altitude streams flowing through the montane forests in the Knuckles region where elevation is about 1100m above the sea level. Also, the environments they live have already been threatened by human activities. Hence, some immediate conservation actions must be taken to protect this rare frog.
Referance:
Senevirathne, Gayani & Samarawickrama, Pradeep & Wijayathilaka, Nayana & Manameendraarchchi, Kelum & Samarawikrama, DRNS & Meegaskumbura, Madhava. (2018). A new frog species from rapidly dwindling cloud forest streams of Sri Lanka—Lankanectes pera (Anura, Nyctibatrachidae). Zootaxa. 4461. 519-538. 10.11646/zootaxa.4461.4.4.
Posted by Buddhika Mawella at 10:35 PM No comments: 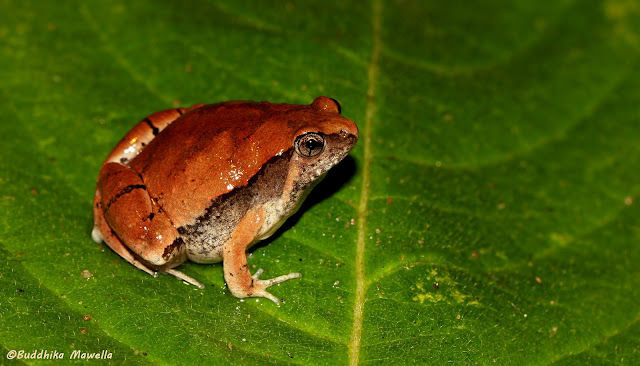 
Mihintale Red Narrow-mouthed Frog(Microhyla mihintalei) is an endemic frog and it was described recently (2016) with the help of specimens collected from dry zone of Sri Lanka including Mihinthale. The species was named after Mihintale which is one of the world’s earliest documented sanctuaries. It is also known as the place where King Dewanampiya Tissa met Mihindu thero who came from India in 246 BC.
But the ancestors of Microhyla mihintalei have found their way to Sri Lankan lowlands from India few million years ago via the land bridge created between Sri Lanka and India which was caused by earlier ice ages followed by excessive ice deposits in poles. But later, rise in the sea level caused land mass between India and Sri Lanka to disappear by creating an oceanic barrier and that resulted closing the land connection between two lands.
In India, Still lives a frog named Microhyla rubra, who is considered to be a descendent of the common ancestor of Microhyla mihintalei. As a result of thousands of years of separation due to the oceanic barrier between two land masses, Sri Lankan population of this common frog has been evolved as the new species we call, Microhyla mihintalei.
Studies have suggested significant genetic distance, morphology and differences in vocalization to distinguish Microhyla mihintalei from its common Indian ancestral species, Microhyla rubra. 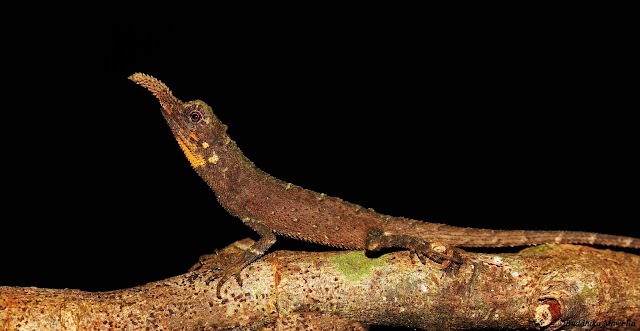 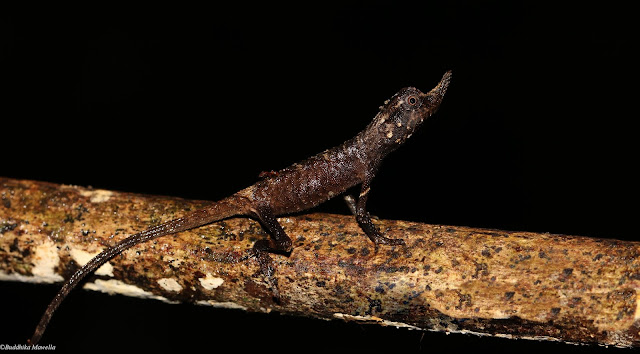 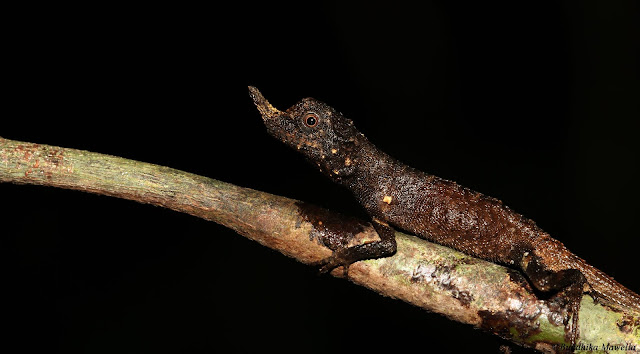 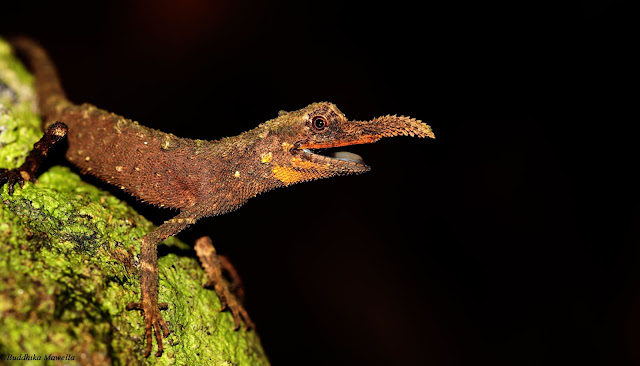 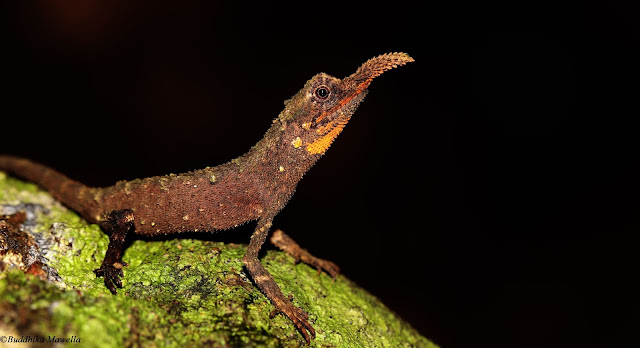 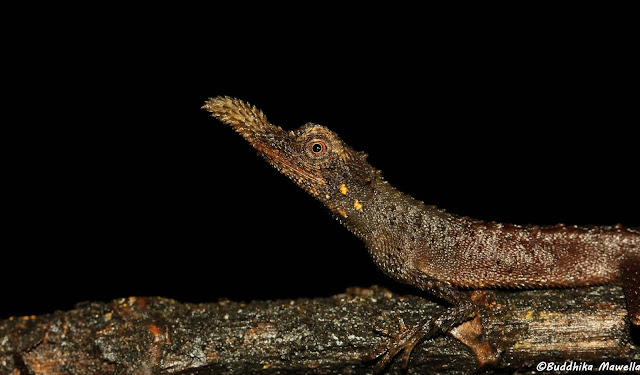 
Ceratophora aspera, an edemic horn bearing lizard was first described by Albert Günther in 1864.Several theories have been suggested to describe the evolutionary purpose of the horn of these agamid lizards.One such hypothesis suggests that it is used for the purpose of communication within the species. Also it is said that more larger and prominent horns in males are used in attracting females for reproduction. Another theory describes that rough, brown colored horn like structure has provided an evolutionary advantage by providing a form of camouflage by letting them to blend with the leaf litter filled environment. Studies carried out using mitochondrial DNA reveals that the diversification of C. aspera has been taken place from its common ancestor about 12.6 million years ago in the Miocene(Schulte et al. 2002).